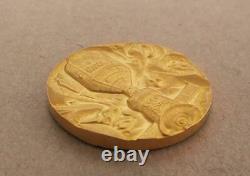 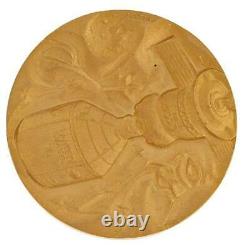 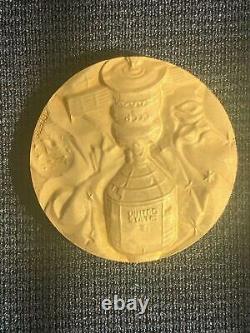 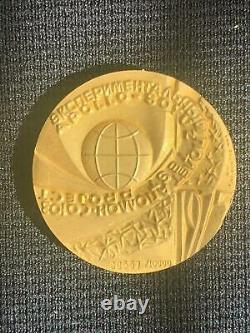 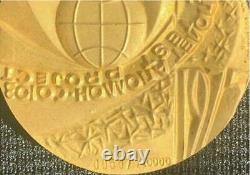 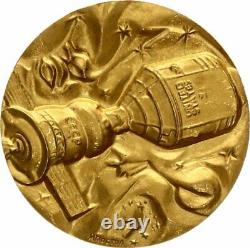 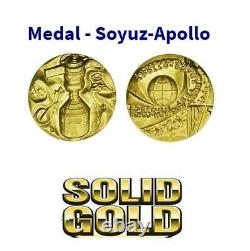 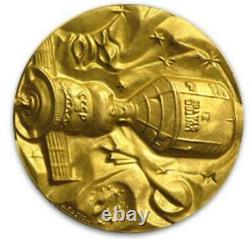 Super Rare Solid Fine GOLD 1975 Bullion Apollo-Soyuz Test Project MISSION Commemorative Medal Round 1oz. USSR Commemorative 1 Oz Fine Gold Medal Apollo-Soyuz Test Project July 1975.
An impressive example of this gold medal, struck to commemorate the joint space mission by the Soviets and Americans. High relief - very interesting item & not often available! An incredible rarity, worthy of the finest collections. Essentially flawless and highly sought after. This is low numbered coin 557/10000. The Coin is uniquely struck with high relief features. Originated from a private collection of Soviet cosmonaut. These were made for the. Astronauts, state officials, families and crew of those involves in the mission. Many of these were melted, lost over last 46 years.

That makes them at least scarce or even rare as we never seen another one like it in this or any condition! Sovereign round backed by the USSR government. Weighing 34.9 grams, numbered "00557/10000", obverse illustrates a globe and star motif, inscribed "APOLLO-SOYUZ TEST PROJECT" in English and Russian and dated "1975", reverse is engraver marked and illustrates the two spacecraft joined together in flight, 32 mm, mint. The Apollo-Soyuz Test Project (ASTP) was the first joint flight of the U.

The mission took place in July 1975. For the United States of America, it was the last Apollo flight, as well as the last manned space launch until the flight of the first Space Shuttle in April 1981. In plastic case of issue, inscribed "USSR COMMEMORATIVE GOLD MEDAL APOLLO-SOYUZ TEST PROJECT July 1975, edition - 10,000, fine gold - 1 oz, THE BANK FOR FOREIGN TRADE OF THE USSR, Commercial Department".

34.9 g (1.12206 troy ounces). 32.77 mm (1.28 in). 2.84 mm (0.11 in). Mint Mark: Mint Moscow Mint??? Metal Content:1 troy oz. Gold (91.67% Au, 8.33% Ar). The Apollo-Soyuz spacecraft against a lunar backdrop. Apollo-Soyuz Test Project (in both Russian and English) / 1975 / 00557/10000 / 900 fine gold / 1 0z. This medal commemorates the first international manned spaceflight mission. In July 1975, two manned spacecraft were launched into Earth orbit--one from Soviet Kazakhstan, the other from Florida. Their rendezvous in orbit fulfilled a 1972 agreement between the Soviet Union and the United States to participate in a joint venture in space. The Apollo-Soyuz Test Project marked a brief thaw in the Cold War and the first time that the two rivals cooperated in a manned space mission. Engineering teams from both sides collaborated in the development of a docking module to link the spacecraft.
The crews visited each other's spacecraft, shared meals and worked on various tasks during several days together in space. This commemorative medal depicts this historic international mission. July 17-19, 1975, with U. Crewmembers Thomas Stafford, Vance Brand, & Deke Slayton and Soviet crewmembers Alexei Leonov & Valery Kubasov.

Apollo-Soyuz Joint US/USSR Space Mission. 32 mm; 34.9 gms. APOLLO-SOYUZ TEST PROJECT in English and Cyrillic along with a narrow field of stars in a modernistic swirl around the globe. Date 1975 at the lower right and numbered 00557/10000 at the bottom.

Reverse: American and Soviet space vehicles docked together. 900 Fine, containing 1 ounce pure gold. This item is in the category "Coins & Paper Money\Bullion\Gold\Coins". The seller is "bob_uzi" and is located in this country: US. This item can be shipped worldwide.