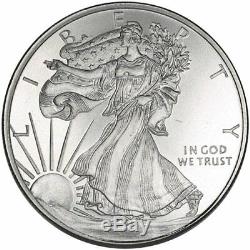 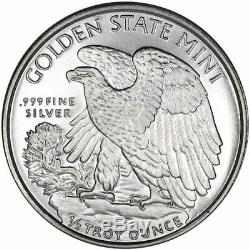 WALIKING LIBERTY: 1/2 Troy Oz. 999 FINE SOLID SILVER ART-ROUND.
Features the iconic image of Walking Liberty! On the obverse is the depiction of Walking Liberty. The reverse side of the round has the image of an American bald eagle. By 1916, the revamp efforts for American coinage had reached a fever pitch.
All of the major gold coins from the United States Mint had undergone revitalization during the first decade of the 1900s, and now silver coins from the nickel to the half-dollar were in line for new designs to carry the nation into a more brilliant future. Weinman was a sculptor who had already created public work ahead of submitting sculpts for American coining competitions at the United States Mint. His Walking Liberty was one of two designs that would be accepted by the Mint for coinage alongside his depiction of a Winged Liberty for the US dime. Walking Liberty was chosen for use on the US half-dollar coin, entering production and circulation in 1916 and staying in production through 1947. Following the halt of production, the coins were eased out of circulation as the new Benjamin Franklin design took over. Today, you can also find the Walking Liberty obverse image on the American Silver Eagle bullion coinage from the US Mint. On the obverse of these oz GSM Walking Liberty Silver Rounds is Weinman's creation of Liberty. Known as Walking Liberty, she is featured striding toward the sun in an effort to advance toward an ever-brighter future. She wears the American flag over her shoulders and carries in her left hand the branches of oak and laurel as symbols of Americas civil and military glory. The reverse of the GSM Walking Liberty Silver Rounds includes the image of an American bald eagle. This particular design is similar to the one Weinman used on the medal for the American Institute of Architects in the early 1900s. The bald eagle is featured on a mountain perch with its wings unfolded behind it as it clutches onto an emerging mountain pine sapling. 999 Fine Silver Diameter: 32.6 mm. Thickness: 2.25 mm Condition: New Brand: Golden State Mint.